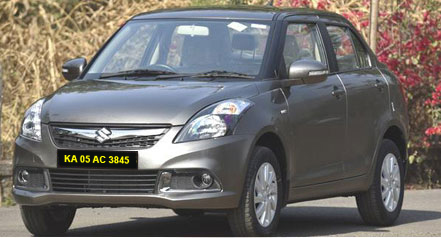 The updated version of the Swift has got majorly cosmetic updates and some minor tuning has been done to the engine. The changes have been made on the outside and even the inside. Some new additional features too have been added on the Swift. The engine and transmission options remain the same and even the underpinnings are the same.

The Maruti Suzuki Swift Dzire got a minor facelift in 2014. There is not much of a visual differentiator between the refresh and the original. The fog lamps now have a chrome part added near to it. There is a minor change in the headlamp design and even the front bumper has been redesigned. There are now LED integrated into the fog lamps on the Z variant models. The headlamp design is the same on the Swift. The other tweaks on the Swift include a new rear bumper, new design for alloy wheels and an update for the tail lamps too.

The Maruti Suzuki Swift Dzire’s interiors are stylish and there is no change in the styling of this premium hatchback. However, what has been done is that now it offers more features than before. Now, the Swift gets bluetooth connectivity, push start and stop button, reverse parking sensors and even keyless entry. The other features on the Swift include the in-dash music system, steering mounted audio controls and 60:40 rear seat split. The rear seat space on the Swift is just fine, however the boot capacity of the hatchback is about 200 litres, which is very small.

Swift’s engine power and the ease of driving make it a gem. The need to shift gears in the city or even the highway is very less. This is what makes the Swift a good product to consider for the Indian car market. The diesel engine has a lot more power and this has better fuel efficiency too. The Swift’s other strong point is its handling. It has good handling and even high speed stability as well.

The Swift has disc brakes at the front, while at the rear it has drum brakes. Then there is ABS that is now optional across all the variants. Maruti Suzuki has just started offering it across all the Swift variants as an optional feature.

The 1248 cc Diesel - powered variant delivers a fuel economy of 23 kmpl in city and 25 kmpl on highways, while the Petrol variant offers a mileage of 18 kmpl on urban roads and 20 kmpl and freeways, respectively.

Maruti is now offering the Swift with optional airbags and ABS across all the variants. With the growing need of safer cars, Maruti Suzuki has been working towards the same. The Swift also comes with features like immobiliser, car locator, valet mode, emergency disarm, radio frequency lockout. The top-of-the-line variant even gets reverse parking sensors, key sense and even personalised pin code as well.

The Swift after the facelift has got a lot more features and this makes it a much better value for money proposition. The Swift’s petrol and diesel enignes, both are highly fuel efficient and offer good performance too.

The Swift competes with the Hyundai Grand i10. Ford Figo, Mahindra KUV100 and the Tata Bolt. There are some of the Elite i20, Baleno and Jazz variants that come close to Swift’s pricing, however they aren’t direct competition.